The Latin American renewable energy industry has an enormous potential for development and growth. The region is geographically perfect to develop all kind of renewable energy sources and is committed to make it happen. However, first it needs to overcome some obstacles and bring more investments into the region.

Our first webinar ahead of the annual CLER forum - The LatAm Renewable Energy Forum will give you a glimpse of what will be discussed in-depth during the conference in Buenos Aires next April. Some of the questions we will be looking to discuss with the esteemed panel of speakers include:

• How LatAm can become the leading region for renewables in the world? Is this achievable?
• How is Argentina catching up in incorporating RE in its electricity mix compared to LatAm and the rest of the world?
• What investments in upgrading the grid are required and how will we go ahead and tackle them?
• Project financing: How can we rebuild confidence and attract new funding partners to Latin America, and specifically to Argentina, given the new global economic scenario?

The LatAm Renewable Energy Forum will take place in Buenos Aires on 26-27 June 2019 and bring together national and international representatives from energy generators, equipment manufacturers, government, investors and key energy users to discuss best strategies and next steps to transform Latin America into the global renewable energy leader.

Join us to get up-to-speed with the current state of affairs, meet our expert panel speakers and pose your questions during the broadcast.

Mr. Tahta is a seasoned professional with a proven track record and vast international business and marketing experience, having lived and worked in USA and several countries across Latin America.

Currently Executive Vice President of the Argentina Investment and Trade Promotion Agency, he has previously worked for 11 years as Business Unit Director and Marketing & Communications Director for Telefonica and Movistar. He has also worked at McKinsey & Co primarily in Latin America and USA as a Senior Engagement Manager, based out of the Buenos Aires office. Before that, Mr. Tahta worked as an Investor Relations Manager at the recently privatized Telecom Argentina. He also has a valuable entrepreneurship experience having co-founded/co-invested in several service companies in Argentina.

Martin has over twenty years of experience in Corporate Finance and M&A and joined Total Eren in February 2017 as Managing Director for Argentina where they have been able to secure 180MW of wind and solar projects. Previously, Martin joined Enfinity (another European renewable developer) in 2008 and was the CFO where he closed equity and debt financing above USD 1.5 billion in USA, Europe and Asia.

Before joining Enfinity, he was responsible for Project Finance at BESI where he was more broadly focused on the infrastructure sector like hospitals, tunnels, bridges and motorways and the renewable energy sector including wind, solar and bio-fuels all around Europe, USA and Canada. Martin holds a MBA degree from IESE (Spain), a Master in Law and Finance degree from CEMA (Argentina) and he graduated from University of Buenos Aires (Argentina) as Certified Public Accountant.

English-born Italian James Lee Stancampiano is Enel’s Head of Business Development for South America. He has a Master of Science in Environmental Economy from the University of Siena. His 12 years of experience with energy projects started in 2005 when he worked on the European Commission’s project for Research, Development, and Dissemination of Renewable Energy Technologies. Between 2005 and 2009 he held positions in different international companies, where he was entrusted with activities aimed at promoting renewable plants and implementing power efficiency in Europe, North Africa and the Middle East.

During his career in Enel, James has managed multiples private and public energy Tender processes in different countries as well as the acquisition & development of more than 60 projects in 4 different technologies –Wind, Solar PV, Hydro, and Geothermal, achieving over 4,500 MW of installed capacity, currently operating or under construction in the Group’s portfolio. Since 2016, he has been appointed as EGP Head of Business Development of South America, covering Brazil, Chile, Argentina, Peru, Colombia, and Uruguay. 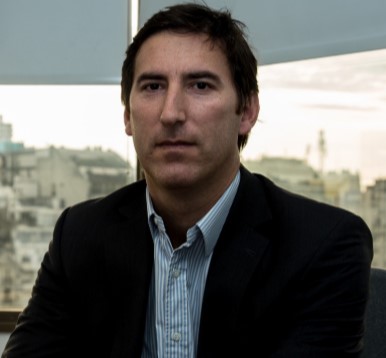 Electronic engineer from Buenos Aires University (UBA), married with 4 kids. Joined Vestas in 2011 based in Argentina has worked on wind projects in LATAM including Argentina, Bolivia, Chile, Colombia, Peru and Uruguay; in interaction with end users, utilities, authorities, lenders and wind associations; contributing to the market leadership and pioneering spirit of Vestas in LATAM that has more than 5 GW in the region. He has been working in the energy sector and energy efficiency for more than 13 years on an international environment, some years based in Germany with Siemens leading business opportunities across the different continents.